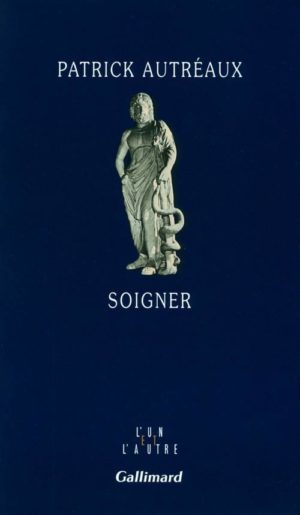 ”To heal, that is to say to take care to the end, is to cross a field where neither the state of the soil nor the nature of the grasses is known. It is to accept the nettle flowers, the putrid slush, the sprains and also the fresh smells, the staked out shade of sun from a solitary tree. It is tiring and hard. We hurt our backs, we’re fed up, we want it to end quickly, we blame ourselves, we try to smile and not to hurry, and we cry in secret after hearing him call this child’s name that only he used.”

Patrick Autréaux was born in 1968.
While studying medicine and anthropology, he wrote poetry and contemporary art criticism. He collaborates on several catalogues of abstract geometric art collections (museums of Cambrai, Mâcon and Cateau-Cambrésis). He decides to stop his practice of emergency psychiatry in 2006.
After a triptych on the experience of illness, In the Valley of Tears (UIT Books), Soigner (Gallimard) and Se survivre (Verdier), he published a novel, Les irréguliers (Gallimard) and a work of theatre, Le grand vivant (Verdier), which premiered in 2015 at the Avignon Festival. Published in 2017, his story La voie écrite (Verdier) traces a path between medicine and literature. A stage adaptation of his story Le dedans des choses was premiered at La rose des vents (Villeneuve d’Asq) in October 2017.
He has been awarded the Villa Yourcenar (2011), the CNL (2010 and 2017), the Paris-Québec scholarship (2012), the Prix Amic de l’Académie française (2012), as well as the Fondation des Treilles author’s residency award (2015) and the Coupleux-Lassalle award (2016).
Author in residence at Boston University in 2018 and 2019, and visiting scholar at MIT in 2018, he created the seminar Through a writer’s eye.
With the publication of the American translation of In the Valley of Tears (UIT Books, 2019), Quand la parole attend la nuit (Verdier, 2019) inaugurates a new cycle in his work (selection for the December and Femina prizes).
He lives between Paris and Cambridge (MA, USA).
His next novel, Pussyboy, will be published in March 2021 by Verdier Editions.