When the Word Waits for the Night 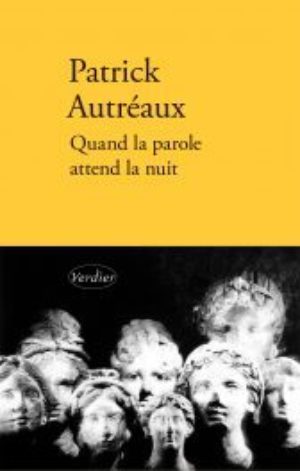 “For a long time, I have wanted to shed light on the intimate side that medical studies, and especially the practice of emergency medicine, can be when borders are pushed and one becomes aware of what it means to be human.
In sketching this mandala of the night, I wrote a novel about love. To write you have to be a little short-sighted. Otherwise you miss your target. A book is this other world that we discover without having looked for it.”
— Patrick Autréaux

In this time between the fall of the Berlin Wall and the Twin Towers, there was an era, ending the last century, that seemed to many to be in abeyance.
Solal was then studying medicine. But his youth is worried. Witnessing parents tearing each other apart, he too knows the joys and disillusions of first love. Having become an intern at the psychiatric emergency room, he learns over the course of the nights on call to listen, to no longer be afraid, to accept his helplessness at times.

A novel of apprenticeship, of initiation into love, Quand la parole attend la nuit illuminates the meanders of this labyrinth where one becomes aware that one is much more than oneself.

Patrick Autréaux was born in 1968.
While studying medicine and anthropology, he wrote poetry and contemporary art criticism. He collaborates on several catalogues of abstract geometric art collections (museums of Cambrai, Mâcon and Cateau-Cambrésis). He decides to stop his practice of emergency psychiatry in 2006.
After a triptych on the experience of illness, In the Valley of Tears (UIT Books), Soigner (Gallimard) and Se survivre (Verdier), he published a novel, Les irréguliers (Gallimard) and a work of theatre, Le grand vivant (Verdier), which premiered in 2015 at the Avignon Festival. Published in 2017, his story La voie écrite (Verdier) traces a path between medicine and literature. A stage adaptation of his story Le dedans des choses was premiered at La rose des vents (Villeneuve d’Asq) in October 2017.
He has been awarded the Villa Yourcenar (2011), the CNL (2010 and 2017), the Paris-Québec scholarship (2012), the Prix Amic de l’Académie française (2012), as well as the Fondation des Treilles author’s residency award (2015) and the Coupleux-Lassalle award (2016).
Author in residence at Boston University in 2018 and 2019, and visiting scholar at MIT in 2018, he created the seminar Through a writer’s eye.
With the publication of the American translation of In the Valley of Tears (UIT Books, 2019), Quand la parole attend la nuit (Verdier, 2019) inaugurates a new cycle in his work (selection for the December and Femina prizes).
He lives between Paris and Cambridge (MA, USA).
His next novel, Pussyboy, will be published in March 2021 by Verdier Editions.