The 4 Investigators of Gwangseon’ mini-market 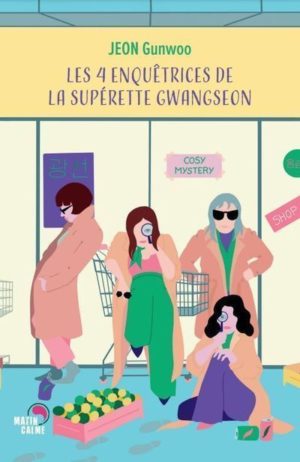 In a neighborhood mini-market, four women meet for small jobs and good afternoons of chatting. They are respectively 20, 30, 40 and 60 years old. All of them are bored with their husbands who compete with each other in laziness and machismo. So when an exhibitionist is on the loose in the neighborhood, they decide to investigate and have him arrested. And they succeed. A little later, in their apartment building, a serial killer resumes his criminal activities after a few years of pause. His specialty: leaving a smiley face badge near the body of his headless victims.
Together, in order to win the bounty that will pay for the divorce of one of them, braving a thousand dangers, the four Sherlock Holmes of the convenience store will set out to track down the killer.

Jeon Gunwoo began his career in 2008 with his short story Sommeil léger. He has written many novels and short stories mixing thriller, horror and fantasy, and an essay about his experience of writing horror novels. He won the first prize in the K-Thriller Writer Contest, organized by the Gokznock publishing house and thanks to which he was able to be published by them. A contract for a film adaptation has been signed for Les étranges histoires du Goshiwon.

Das Mädchen is a graphic designer and illustrator. Very influenced by mythology, tales and the imaginary, she develops a dreamlike and offbeat style, sometimes tinged with irony. The plant world but also chimeras, women and childhood have a special place in her illustrations, whether they are treated in a “traditional” pointillist style or in a more pop and colorful vein.