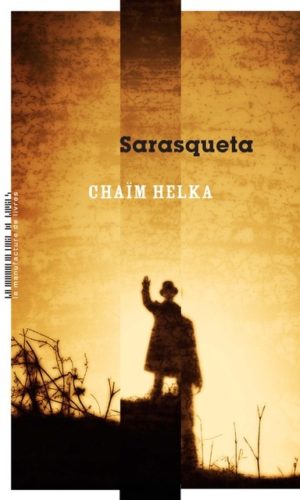 1939. It was supposed to be a few hours of solitude in the heart of rough and steep landscapes for the man, a parenthesis at the end of the day, a hunting party under the crushing Spanish sun. But the unknown man in black appeared in the distance, mysterious and implacable, his rifle in his hand. And the man understood that the target was him. Then began a curious chase, one that could not be avoided, a pursuit with no way out. It remained for the man to understand why, and if one day, he had not himself, without knowing it, opened the door that led to the underworld. Sarasqueta is the story of a fall, of secrets finally revealed and of the accounts that one day must be rendered.

With this poetic, hypnotic novel, Chaïm Helka tells us the story of an inexorable face-to-face encounter with death and debts that we always end up paying.

Chaïm Helka was born in 1975 to an Algerian father and a Spanish mother and spent part of his adolescence abroad. Today, he lives and works in Dijon. His literary influences range from Louis-Ferdinand Céline to Charles Bukowski and he cites among the books that have most influenced him Racine’s Phèdre, Gustave Flaubert’s Madame Bovary and Melville’s Moby Dick. After Nous sommes un orage sous le crâne d’un sourd (2013), Sarasqueta is his second novel published by La Manufacture de livres.

A novel of great poetic force, evoking Dante’s Divine Comedy and Albert Camus’ The Fall, a modern metaphor for a descent into hell.

A story rooted in the history of the twentieth century with the evocation of the Spanish war, Franco’s regime, the exodus to the United States.