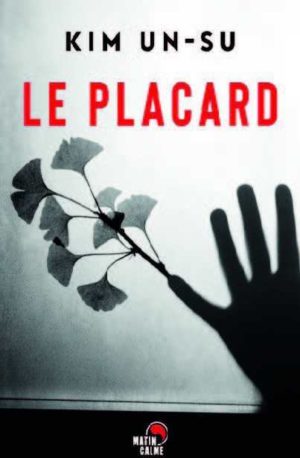 Against the backdrop of a secret society and hidden files, deliciously fantastic, skillfully paranoid, The Cabinet is as much a fable as it is a one-of-a-kind noir novel, pure Kim Un-su.

The narrator is a young guy, not very ambitious, rather slow, quiet. He hung around after his studies, time goes by, his thirties arrive when he finally gets a job, in a private laboratory. In fact, he has practically nothing to do, just receiving the daily arrivals. At first he is embarrassed, until he discovers that, roughly speaking, nobody does anything in this laboratory, except pretend to be busy.
One day he finds a cupboard closed with a combination lock. Out of sheer idleness, methodically, he will try to open it. And when he suddenly succeeds, he comes across some fascinating files. Some people consult a certain Dr. Kwon from the laboratory. But the “illnesses” of these people are anything but usual. One has a ginkgo growing on the tip of his finger, another makes abrupt jumps in time, a woman becomes several people at once.
And these files seem to interest a strange secret society, ready to do anything to get them back...

Kim Un-su was born in Busan, South Korea, in 1972. As a child, Kim Un-su walked the streets of upper Busan, where poor families and aspiring thugs lived. He published his first texts, short stories, in magazines in 2002 and 2003 before releasing his first novel, totally crazy, mocking and paranoid, in 2006, The Cabinet (Gingko Publisher).
In 2010 he published his first detective novel, The Plotters (L’Aube, 2016), which assured him worldwide success. Hot Blood was published in 2017 in Korea. It has already been sold in a dozen countries, including Doubleday (publisher of Dan Brown, Stieg Larsson and others). Kim received the Munhakdongne Fiction Prize for The Cabinet in 2006, and was a finalist for the Grand Prix de Littérature Policière in 2016 for The Plotters.

The strength of the main character, the narrator, a spleeny young idler. The other hero: the mysterious Dr. Kwon, the unavoidable paternal figure of the KUS novels.