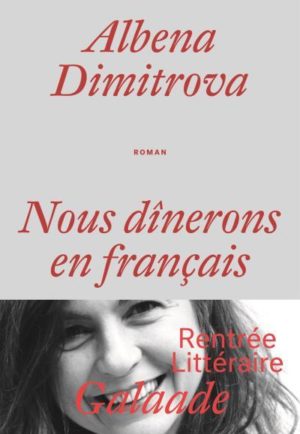 With this first novel, carnal and moving, which she chose to write in French and not in Bulgarian, Albena Dimitrova delivers us a magnificent love story carried by a language “with accent”, at the same time strong and poetic. She also offers us a sharp look at today’s neo-liberal society.

It all starts at the Bulgarian government hospital where Alba was admitted for galloping paralysis. She is seventeen years old and meets Guéo, fifty-five years old, a member of the Politburo. Aware of the communist rout, he never stops working on a report. There, in this sanatorium, then from Sofia to Varna on the shores of the Black Sea, they will love each other. Passionately, absolutely. Monitored by the secret service, in those ancient days that are the last years of communism just before the fall of the Berlin Wall. Three years, maybe four... until the moment when Guéo goes too far: the noose tightens and Alba has to flee. They meet in Paris for a first dinner in French.

Born in Sofia in 1969, Albéna Dimitrova joined France a few months before the fall of the Wall. Upon her arrival in Paris, the only words she has in French are “bonjour” and “voyage”. Since then, this language has become a land of welcome for her.
As an economist, she has conducted research on the mathematical modeling of systemic risks applied to mass privatization and the mechanisms of corruption. She successively held positions of responsibility in the international departments of the Caisse des Dépôts et Consignations, GIE Intergroupe, Banque Arjil (Lagardère Group) and then managed the company ADV-Corporate Finance. Parallel to her activities, she was General Secretary of the Alliance France-Bulgaria under the presidency of Pierre Consigny and rapporteur for the think-tank Forum du Futur at the National Assembly.
Since 2014, Albena Dimitrova has devoted herself entirely to writing, novels, dramaturgies for the theater, and screenplays for the cinema.
Nous dînerons en français, her first novel published by Galaade in 2015, won the Europe 2016 Prize for French-language literature and has been selected for numerous literary awards including Anaïs Nin, Sezam, Grandes Écoles, Porte Dorée (finalist), Les Cinq Continents (finalist). The novel has also been published in German by Wagenbach under the title Wiedersehen in Paris, translation Nicola Denis.
His next novel to be published, La Lobbyiste - Chemin à Six Virages, has been awarded the 2017 creation grant from the Centre National du Livre.

“Communism has collapsed. Perhaps the Guéo report would have saved it. The messages of my eyelids keep their secret, but my life is saved.”