You Make Your Fairy Godmothers Cry 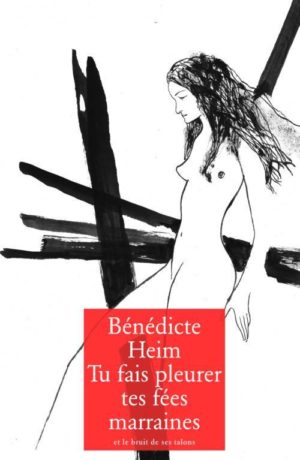 “...You can open a book by Benedict Heim anywhere, at the end of the first line read, you’re caught, shod, intoxicated! You are in this world that you thought didn’t exist. Her medium is her style. Unbelievable, baroque and percussive, never seen with such force, such magnitude. His favourite place is the crest line where everything is high and sharp. Its fuel, love. But there’s not enough love...”.
— ADK

A woman navigates between chosen men. She rubs herself against them, invents herself in contact with their skins, their language, their stories. Their silences too.
There is the artist, whimsical, histrionic, who regales her with a thousand and one recitative nights.
There is the perpetual lover, lunar, detached, who straightens the world and establishes the sure foundation of an unfailing love.
There is man. Without any other possible name because he is also the figure of the unknown, of the unknowable, he is the absolute other, who escapes the grasp and digs an incendiary desire.
A few female figures also cross the landscape and leave their mark, delicate or eruptive.

Through these portraits, constantly taken up again and again and embroidered with a different stitch (tighter, more refined, or attempting a new angle of approach), Bénédicte Heim creates a hypnotic, almost mediumistic language, which endeavours to tell the sensations as close as possible to the truth of desire, its swings, its violence, its metamorphoses, its withdrawal.

Bénédicte Heim was born in Strasbourg.
Her first novel Soleil Coupé was published in 2000 by Baleine Editions. The next 15 by Les Contrebandiers, including Tu ne mourras pas et Nues.
Since 2018, On a brûlé les ruches blanches and Hautes Coutures have been published by Et le bruit de ses talons.