Letters From my Elsewhere

Why Dream Other People’s Dreams?

Letters From my Elsewhere 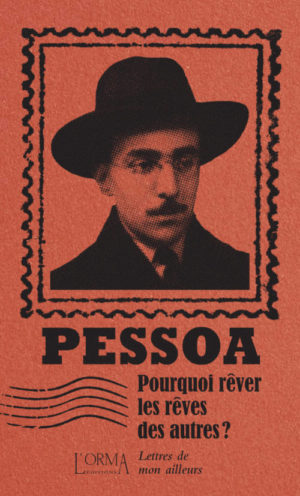 “If ever I am consistent, it is only because of my inconsistency.”
— Fernando Pessoa

From the dark and anonymous backroom of a tobacco shop, Fernando Pessoa has invented surprising literary universes by making otherness a practice of life, a system of thought and a device for creation. These ironic and passionate letters propose a journey into the plural and dizzying spirit of the poet, to discover the other that is within us.

Alvaro de Campos, Ricardo Reis, Alberto Caeiro…, a myriad of names hiding the same writer: Fernando Pessoa (1888-1935). Appearing in the course of his correspondence, Pessoa’s doubles bear witness to his poetic genius and his profuse, composite inner world, on the edge of schizophrenia. In his letters written in Portuguese, English and French, the writer discusses his poetry, including his use of heteronyms, with his peers and friends. Also included in this book are the now famous letters to Ofélia Queiroz, his eternal fiancée.

Fernando Pessoa (1888-1935) is a Portuguese writer and poet. During his lifetime he regularly published in Portuguese literary magazines and created one of them, the famous Orpheu. When he died, 27,543 texts were discovered buried in a trunk that was gradually exhumed. The mythical and posthumous book is “The Book of Intranquility”. Pessoa created a multiple and complex poetic work under different heteronyms in addition to his own name.