Literature is a way of returning punches. 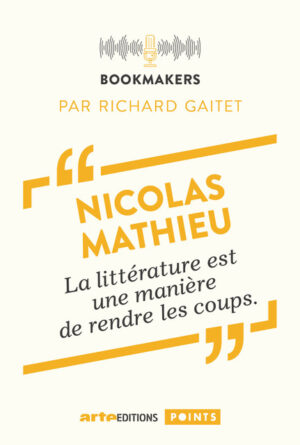 Adapted from the podcast, an interview entirely rewritten and enriched with unpublished passages.

How do you write without betraying the environment from which you come? Nicolas Mathieu looks back at the birth of his vocation, his daily discipline and the “punches” that literature “allows him to give back to life, which gives us a lot of grief”.
A fascinating dive into the factory and the inner worlds of the little blue boy from the Vosges, who has become one of the rising figures of the contemporary novel, whose anger against “the lies, the falsified everything” remains one of the fuels, and who says with joy that he learned more from watching The Sopranos than from studying Tolstoy.

Born in Lyon in 1981 on a sparkling autumn day, Richard Gaitet is the author of three novels published by Intervalles Editions: Les heures pâles (2013), Découvrez Mykonos hors saison (2014) and L’aimant (2016, with drawings by Riff Reb’s). He then published two documentary stories with Paulsen Editions: Tête en l’air (2018) and Rimbaud Warriors (2019).
He is also a journalist for Arte Radio and Radio Nova, where he hosts and produces the podcasts “Bookmakers, les écrivain·e·s au travail” and “L’Arche de Nova”.
Richard Gaitet is also the co-author and voice of the animated series Culte – lecteurs sous influence, created by David Brun-Lambert and Aurélie Pollet, broadcast on the Arte website (2017). Finally, he participated in the screenplay of the film Si tu voyais son cœur, directed by Joan Chemla, with Gael García Bernal (2017).

Born in Épinal in 1978, Nicolas Mathieu is notably the author of Aux animaux la guerre (2014, adapted for television with Alain Tasma), then of Leurs enfants après eux (Actes Sud, 2018), which won him the Goncourt Prize, and of Connemara (Actes Sud, 2022), confirming the critical and public acclaim for his social frescoes.

The new collection to know everything about the great names of contemporary literature, from Richard Gaitet’s podcast on Arte Radio.