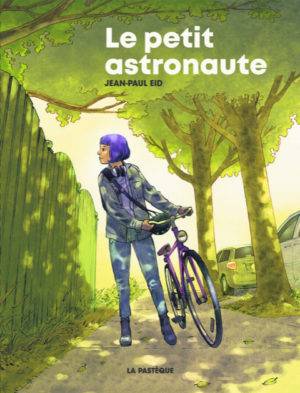 Attention, masterpiece! Jean-Paul Eid’s Le petit astronaute is an ode to life, a moving celebration of difference through the arrival on Earth of a severely disabled child.

Every year, Juliette makes her pilgrimage by bike to the neighborhood of her childhood. But this year, in front of the old family apartment, a sign reads: For sale – Open house. As she opens the doors of her childhood home, memories come flooding back: friends, small pleasures, but especially the shocking arrival of her brother Tom, the little astronaut.

Jean-Paul Eid was the star author of the humoristic magazine Croc, where he published the adventures of Jérôme Bigras from 1985 to 1995. A magician of “méta-BD”, he has fun deconstructing the language of the medium, as in his album Le fond du trou (Grand prix de la Ville de Québec and Prix spécial du jury Bédélys 2012), a perforated book whose hole allows the characters to physically cross the story as if they were traveling through time.
At the same time, he began a collaboration with playwright Claude Paiement, from which were born the graphic novels La femme aux cartes postales (Grand Prix de la Ville de Québec and Prix ACBD Québec 2016) and the science fiction story Memoria.