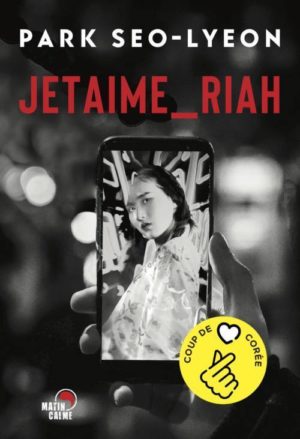 The revenge of a sister.

They were two sisters. As different as they were related, in full sororal communion. The youngest, Riah, was beautiful, kind, gentle. She became a star of the social networks. Followed by thousands of fans, she committed suicide with gas in her car. But on the day of her funeral, her older sister receives an anonymous email: it would not be a suicide. With the help of Riah’s hidden lover, a young missionary, she leads the investigation.
And her investigation leads her to her sister’s official boyfriend, an arrogant young man from a “big family” who seems to be recovering very quickly from the death of his lover.
When the evidence piles up, the older sister and the secret boyfriend decide to take action. They are helped by the big sister’s new girlfriend.

Park Seo-lyeon was born in Cheorwon, Gangwon Province. In 2007, she won the Daesan Prize for Young Adult Literature with her short story Exit (written in high school). In the same year, she won the Munhakdongne Prize for teenage literature with a collection of poems. In 2015, she won the Silcheon short story competition (quarterly magazine of “engaged literature”) with Mickey Mouse Club.
Her first novel L’ouvrière sur le toit (2018) is set in the 1930s. It is based on the story of Kang Juryong, a female worker who protested against the Japanese occupation by climbing onto a roof. It won her the prestigious Hangyeorye Award.

Feminine/Feminist story: two sisters have to read against men.

A glittering sister, a hard-working sister.

A hard-hitting book, with no dead time.

A story with a lot of dialogue, a ping-pong of lines in a very effective “young” language.