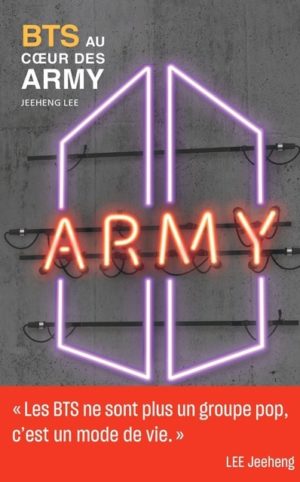 “It’s when you need it most that you meet the BTS.”

Lee Jeeheng’s book, BTS and ARMY Culture, is an essay on the worldwide phenomenon of the ARMYs, the fans of the K-pop group, BTS. It plunges us into the world of viral promotion, without forgetting to denounce its shortcomings, sometimes its darkness.

An essential book to understand this new paradigm, the mutation of “users” into fandom.

The BTS were born at Big Hit, a small independent production company of which they were for a long time the only artists. What made them a global success, beyond their talent, was their fandom. In July 2013, a few weeks after their own creation, the group announced that of their fan group and named it A.R.M.Y., for Adorable Representative MC of Youth.

In her book, the author explores the relationship between the group BTS and its fans. In particular, she deciphers the workings between the media and entertainment industry on the one hand and BTS fandom on the other.

Since 2013, ARMYs have become the spearhead of viral promotion. Every day, thousands of fans are active on Twitter (their favorite network with Kakao) and other platforms to promote their idols.

A film teacher at Chung-Ang University and a graduate of the highly prestigious Ewha Woman’s University, Lee Jeeheng has a brilliant academic background in the humanities. Her research on popular culture in new media led her to the group BTS and its fans, called ARMY. What she discovered was a near-revelation: on the bangs of the media and music majors, a band had become number one in the world by the sheer force of its ARMYs.