The Adventures of China Iron 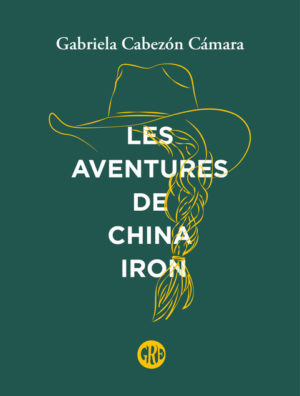 The Adventures of China Iron, Gabriela Cabezón Cámara’s second novel, celebrated by critics and finalist for the International Booker Prize 2020, is the radiant and luminous epic of a woman who frees herself and takes with her the boundless landscapes of the pampas. Take Martín Fierro, a gaucho who gives his name to an epic poem, a founding myth of Argentina. Now imagine that he has a wife, China, and it is she who sets out to conquer a new way of living together. What you have here is a wonderful story of love and adventure, a queer western, and a call to found a world where all creatures would embrace each other with desire and enjoy the same love for rivers, birds or trees, and where they would never feel alone again. Gabriela Cabezón Cámara seizes a canon of Argentine literature, subverts it and turns The Adventures of China Iron into a universal and contemporary myth, full of joy, love and freedom.

Gabriela Cabezón Cámara was born in San Isidro (Buenos Aires) in 1968. She studied literature at the University of Buenos Aires (UBA). In 2013, she received a Writing in Residence Fellowship at the University of California, Berkeley. She has been editor of Clarín’s Culture supplement and collaborates with media such as Crisis, Página / 12, Fierro, Eterna Cadencia and Anfibia magazine. She is the author of the novels The Adventures of China Iron (2017, Ogre 2021) and Pleines de grâce (2009, Ogre 2020) and the novels Romance de la Negra rubia (2014) and Le viste la cara a Dios (2011). A feminist and LGBT activist, she is also one of the instigators of the Ni Una Menos movement that fights feminicide and violence against women.

Gabriela Cabezón Cámara takes on both an Argentine myth and a literary genre to overthrow them, to reappropriate them, and to draw from them a fiction inhabited by a very young heroine, “China”. As if the adventures of Ulysses had been lived and told by Penelope.

The success of its English translation, shortlisted for the 2020 International Booker Prize, confirms that this novel can transcend all borders, including linguistic and national ones.

A story of love and adventure, a political story too. According to the author, isn’t the writer’s role to “work on stories that are not end stories, obedient stories or resigned stories”?