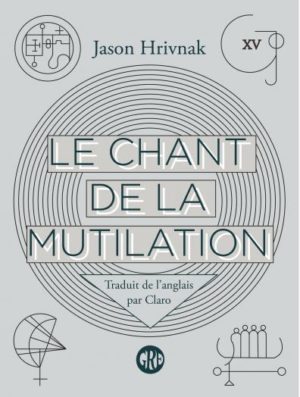 “The question, the fear, that was bothering me as I was writing this book was: how can a tiny little thing bait us, be enough to motivate us to live another day, and how small can that thing be, how tiny can the thing that allows us to survive be?”

With this long monologue of Dinn, entirely dedicated to the training of his demon apprentice, that is to say to the most total corruption of his mind, Jason Hrivnak explores a little deeper into the depths of the human psyche, with tenderness and cruelty, to discover what within it is still trying to resist corruption. Half demonology, half schizophrenic delirium, Mutilation Song is above all and paradoxically a message of faith in humanity.

Jason Hrivnak was born in 1973 in Toronto, Canada. With a degree in literature, he works in the Canadian publishing world. His first novel, La Maison des Épreuves was published in 2008 by Pedlar Press in Canada and in 2016 in French by Éditions de l’Ogre. His second novel, Mutilation Song, was published in Canada and the United States in July 2018.

“Child of the occult love of Georges Bataille and David Lynch, Hrivnak’s Mutilation Song is a disturbing and surrealist meditation on the demons that haunt us and the nature of evil.”

“Imagine a mix of C.S. Lewis, J.G. Ballard and Bret Easton Ellis and you have Mutilation Song.”