Letters About Family and Other Monstrosities

How to Not Educate Children

Letters About Family and Other Monstrosities 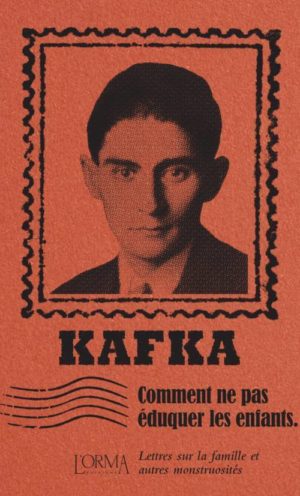 “Parents can be great educators, but only with other people’s children.”
— Franz Kafka

The remarkable paradoxes of the human soul and the fragile labyrinths of the child’s psyche exposed in the letters in which Franz Kafka analyses the behaviour of the “animal-family”. Questioning the family yoke, he pulls himself out of the maze of his engagement and demolishes, not without emotion, the paternal figure. The most surprising prose writer of the twentieth century turns out to be a subtle and extremely lucid pedagogue.

The nightmarish atmosphere of the novels of Franz Kafka (1883-1924), his sharp eye and restless pen made him one of the major writers of the 20th century. Eternal bachelor, he lived an almost uneventful life in the family home, which was transformed at night into the theatre of his literary dreams. His letters, in which his ironic and tender spirit shines through, bear witness to an almost monastic discipline of writing and a desperate humour in the face of man’s destiny.