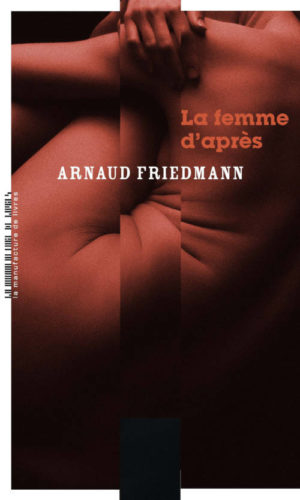 A night in August. She walks to her hotel after dinner on the terrace of an apartment in Montpellier. She feels light, exhilarated by the promise of a new adventure with a lover rediscovered twenty years after their last meeting. But in the night, she hears voices and footsteps. Three young men stop in front of her. Words exchanged, an insult, a defiant look. The men leave. One could say that nothing happened. And yet, a dull anguish remains, guilt and questions which she cannot admit to herself. Why her? What allowed her to win this duel of a few words, reflexes and uncontrollable thoughts? Why does the unworthy suspicion of not having been desirable enough run through her head?

La femme d’après shows us the implacable mechanics of an aggression that in the eyes of everyone else goes unnoticed. Echoing this scene, with finesse and sensitivity, Arnaud Friedmann explores the wounds and desires that mark this woman as the autumn of her life begins.

Arnaud Friedmann was born on July 17, 1973, in Besançon. Between two stays in Italy, it is in this city that he did a literary preparation, before continuing his studies of contemporary history. His master’s thesis deals with Cambodian immigration in the 1970s and 1980s: he later drew inspiration from interviews with refugees to compose the children’s novel, Le trésor de Sunthy (published by Lucca).
Anxious to acquire professional experience in “real life” in parallel with his passion for writing, he passed administrative exams and successively worked as an employment counselor in the Yonne, director of an ANPE agency and then of a Maison de l’emploi in the Vosges, before returning to his native town as a parliamentary attaché and then as the head of partnership relations at the Pôle Emploi Bourgogne Franche Comté (Burgundy Franche Comté Employment Cluster).
From his experience in the civil service, he draws a collection of short stories, La vie secrète du fonctionnaire (JC Lattès editions, Prix Louis Pergaud 2016).
With a bookseller friend, he takes over in September 2018 the oldest bookshop in Besançon (created in 1973), Les Sandales d’Empédocle.

A disturbing novel about the relationship between desire and the passage of time.

A text which approaches taboo themes with a lot of psychological finesse.