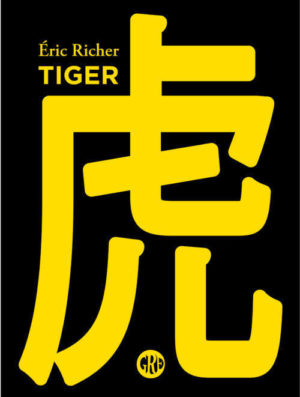 A noir novel carried by implacable language mixed with tenderness and violence, Tiger questions the possibility of a refuge, a protective place, and through it that of love and justice.

In Xian, in the near future, Xujin is running a shelter for children uprooted from the streets and prostitution rings, while the shadow of Tiger Bone, a vengeful old shaman, haunts the night. In Russia, Esad, a slightly lost Russian trafficker, falls in love with a young Chinese prostitute, Tiger, and tries to snatch her from her pimp’s hands. When, on the run, he arrives at the refuge accompanied by a young man who has managed to escape from the truck where he was being held prisoner, he forever disrupts the balance of this place and poses a threat.

Éric Richer was born in Avignon in 1971. He grew up with 7 dogs, read a lot, studied cinema, filmed, projected, and went to Japan. There, he makes a documentary, comes back, and returns in the darkness of the projection booths. His first novel, Rust (L’Ogre Editions, August 2018), was very well received by booksellers, received the Prix des rencontres à lire from Dax and the Prix des librairies Payot 2019. Tiger is his second novel.

The second novel of the noted author of Rust.

An implacable writing mixed with tenderness and violence.

A rare and intense immersion in contemporary China.

A great novel about the possibility of love.