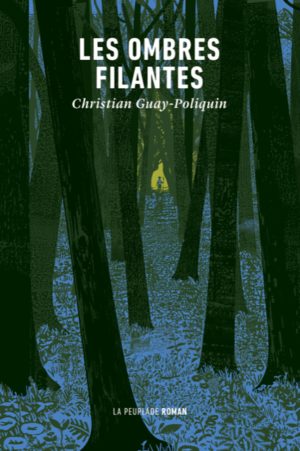 The return of Christian Guay-Poliquin, renewed and masterful.

In the forest, a man walks towards the hunting camp where his family has taken refuge from the turmoil caused by a widespread power outage. He heads into the mountains, following trails and streams.

Facing the hostility of the wilderness, he must also be wary of others who, like him, have chosen to disappear into the woods. On his way, a little boy calls out to him. He is about ten years old, with bushy hair and eyes as black as coal. Although the presence of this child in this place remains a mystery, the man drops his loneliness and continues his journey with him. When they arrive at the camp, they discover a community organized around the barter of meat, various tasks and an old generator.

With Les ombres filantes, Christian Guay-Poliquin offers an astonishing political fable on the necessity, for any society, to take into account the future of its youth.

Born in Quebec, Christian Guay-Poliquin is a writer. He published Le fil des kilomètres in 2013(Running on Fumes,Talonbooks 2016) and Le poids de la neige in 2016 (The weight of snow,Talonbooks 2019), novels that have been translated into more than fifteen languages around the world and are the recipient of numerous awards in Canada and Europe, including the prestigious Governor General’s Award of Canada.