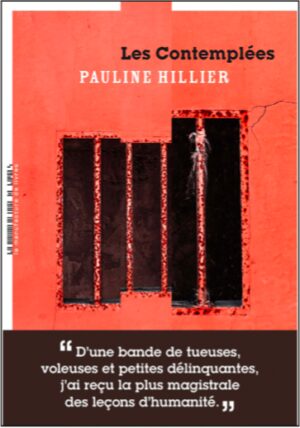 2013, Tunis. After a demonstration, Pauline, a young French woman, is arrested and taken to La Manouba, the women’s prison. Within these walls, it is another time, a new world order, rules that are revealed to her in a language she barely understands. In Pavilion D, a cell she shares with twenty-eight women, she has only been able to keep a book with her, Victor Hugo’s Les Contemplations. Poems to hold on to. But soon, in the margins of this book, Pauline will begin to write another story. That of the killers, the thieves, the victims of judicial errors who tell her their truth over the course of the day. The story of these women who share her daily life, who offer her their looks, their smiles and teach her to remain strong and dignified no matter what happens.

Vibrant with humanity, Les contemplées, a fiery autobiographical novel, gives us the incredible portrait of a group of women united against the injustice of men.

Pauline Hillier has been writing since she was a teenager. After studying in the Bordeaux area, she published her first novel, À vivre couché, in 2014 with Onlit Editions. A member of the international movement FEMEN until 2018, she was imprisoned in 2013 in Tunisia following an action taken to demand the release of a Tunisian activist. Her novel Les contemplées was inspired by her time in prison.

An autobiographical novel that takes us with its narrator to the heart of the women’s prison in Tunis.

A magnificent text on sisterhood.

A gallery of incredible portraits of women.