Happiness Around the Corner

Letters of joy and barricades 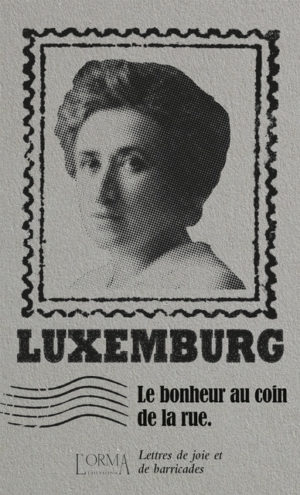 Icon of the revolution, Rosa Luxemburg always defended—behind bars and on the barricades—the cause of the weakest. In her letters to her companions and friends, she claimed a fierce freedom and devoted herself to art with a dazzling joy. A militant of truth, with an extreme sensitivity to nature, she knew how to capture all the moments of happiness and the splendor of the world. A woman who chose truth and fought passionately for it to be synonymous with beauty.

A major figure of revolutionary socialism in the 20th century, Rosa Luxemburg (1871-1919) never tired of fighting inequality and injustice. A Marxist activist and theoretician, the great Polish politician was committed to educating the masses through her work as a journalist and teacher. Although she was silenced—she was imprisoned and died murdered—her voice remains, powerful and untamed.

The letters of the most inventive theorist of socialism after Karl Marx.

A luminous and joyful militancy.

An ode to life, nature and resistance